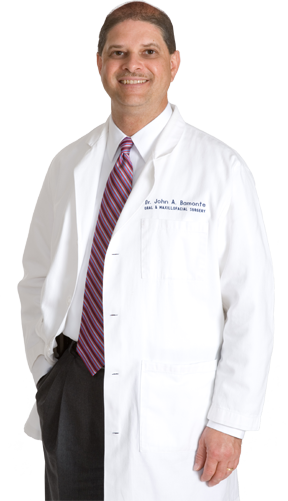 Dr. John A. Bamonte, a native of the Pittsburgh area, is a graduate of Allegheny College in Meadville, Pennsylvania, where he received a Bachelor of Science degree in Biological Sciences. He then attended the University of Pittsburgh School of Dental Medicine and finished in the top 10 of his class in 1984 with the degree of Doctor of Dental Medicine. Through 1985, Dr. Bamonte practiced general dentistry with his father in Natrona Heights and concurrently earned a Master of Science degree in Anatomy/Histology at the University of Pittsburgh.

Dr. Bamonte served a four-year hospital surgical residency in oral and maxillofacial surgery at the Medical College of Virginia Hospitals of Virginia Commonwealth University in Richmond, Virginia, and received his certificate in June 1989. The Medical College of Virginia is among the four largest university health centers in the United States and enjoys a pre-eminent national reputation in oral and maxillofacial surgery as well as general surgery, cardiac surgery, and head trauma research.

In 1992 Dr. Bamonte achieved board certification as a diplomate of the American Board of Oral and Maxillofacial Surgery. In addition to private practice, Dr. Bamonte currently holds a teaching appointment with the oral and maxillofacial surgical residency program at the University of Pittsburgh Medical Center.

Dr. Bamonte enjoys a variety of sporting activities and hobbies and is an avid reader with a special interest in history and the fine arts. Dr. Bamonte resides in Pine Township with his wife and has three grown children.